While work on maritime autonomy has proceeded at speed globally, a pair of U.S. companies – Metal Shark and Sea Machines – have jumped to the fore in delivering solutions that have evolved from the research & development department to work on the waterways.

When talk turns to “autonomy” in the maritime sector there are more questions than answers. It is generally agreed that the technology is ahead of both legislation and business concerns, such as insurance. It is also generally agreed that short, local ‘point A to point B’ routes will emerge more quickly; while true autonomy on large oceangoing international ships is a generation or more away. The path to crew-less ships is a long one, defined more by small steps than gargantuan leaps. For insights, we sat (virtually) with two leaders, Michael G. Johnson, Founder and CEO of Sea Machines, and Chris Allard, CEO, Metal Shark – two companies that were recently selected by the U.S. Coast Guard to supply a new autonomous test vessel – for insights on the pace and direction of maritime autonomy in 2021 and beyond.

In late September 2020 the United States Coast Guard (USCG) selected Metal Shark and Sea Machines to supply an autonomous test vessel to the USCG Research and Development Center (RDC). The welded-aluminum 29 Defiant craft is the latest product of Metal Shark’s Sharktech Autonomous Vessels division to be equipped with Sea Machines SM300 autonomous-command and remote-helm technology. The new vessel will then be homeported at the RDC’s facility in New London, Conn.

“Sea Machines is a five-year-old company, and I think one of the first business trips we made was to the Coast Guard R&D Center,” said Johnson. “One of the things about the Coast Guard we felt from the very beginning is that there was a strong interest, to where we felt that they were encouraging us to move forward with this technology,” to help address some of the challenges inherent in human-error accidents across the maritime space. “Autonomy (is a) big value driver to bring predictability to operations, de-risking operations and making them safer.”

While Sea Machines’ technology is agnostic to boat manufacturer or platform, it has built a close relationship with Metal Shark in recent years. “We have a really good setup with the Sharktech boat with the Sea Machine system on the Metal Shark 29 D, and from my understanding, they (the USCG) saw what we had and they basically said: ‘We want that.’”

“I tend to think of Sea Machines as a like-minded company,” said Chris Allard, CEO, Metal Shark. “They are forward-leaning, they’re quick, and they’re doing new things often outside of being asked to do it. They’ll see a market opportunity and just do it. (I see Sea Machines as a) cultural fit with our company; we’re in different spaces but both spaces need each other.”

Opportunities abound
While the market for autonomy is in its early infancy, there are many areas where it could potentially manifest quickly, including data collection/survey; surveillance and protection around fisheries, and commercial passenger and crew vessels, to name but a few. “The big area that we’re working on now is crew transport vessels,” said Johnson. You will see a lot of them for really the first movers are in the wind farms. It’s a very routine because the wind farms stay in one area, one spot, there’s a fixed base and it’s a back and forth operation. It’s a routine operation where autonomy brings a lot of value.

Metal Shark is amply diversified across commercial, government and military markets. “We see a different adoption across different segments,” said Allard. “(The military is) jumping straight towards autonomy and it’s completely changing the mission and the capability. I think we’re at the turning point of autonomous systems going from that R&D stage to that full rate adoption.” On the commercial side, as has been the general track on other tech adoption, it’s more of a slower, progressive ramp up.” While Johnson agrees that the military space is taking the early lead, he and Allard are most bullish on the commercial sector premised on volume. “The commercial space is a follower to the military space, but (once the technology matures) the adoption rate is going to come at us quickly. The other side of it is the commercial space is just so much larger than the military naval space from numbers of vessels.”

In the commercial space, ‘autonomy’ is not on the radar of most operators, particularly with the challenges of simply staying in business today due to challenges presented courtesy of the COVID-19 pandemic.

While the general commercial maritime operator is not fully up to speed on autonomous systems – or for that matter even asking about them at this point, Allard emphasizes an understanding of the scope of “autonomy” in the big picture. “Sometimes I hate to say this in front of them (Sea Machines) on the risk that he’ll raise prices, but in the scheme of things, the autonomy system is a relatively small portion, price-wise, of what can be a multi-million dollar asset. It can start to be comparable to the cost of a wage for a year or a small increase in safety or fuel economy. So, I think that the tipping point, when you look at the relative cost of the technology to the high capital cost of the asset, is going to really play in the favor of autonomy.” 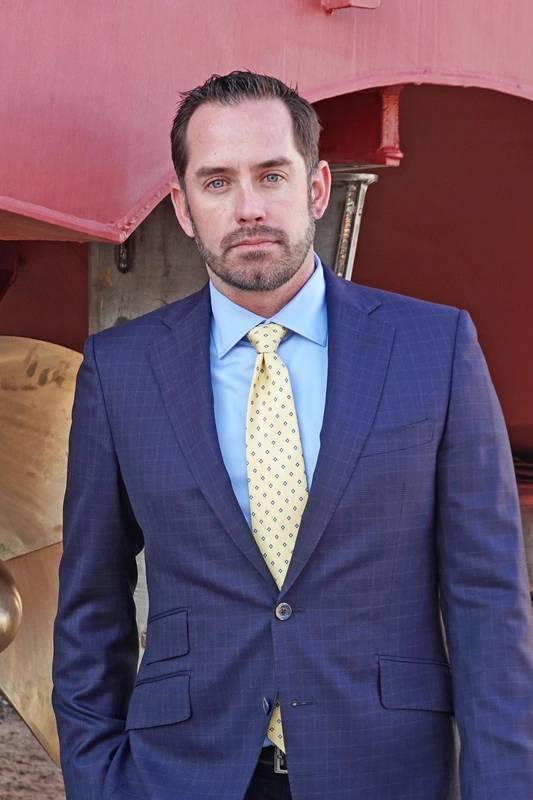 “In the scheme of things, the autonomy system is a relatively small portion, price-wise, of what can be a multi-million dollar asset. It can start to be comparable to the cost of a wage for a year or a small increase in safety or fuel economy.” Chris Allard, CEO, Metal Shark (Photo: Metal Shark)

Hurdles ahead
While advanced autonomy depends on the confluence and connectivity of multiple new technologies, according to Johnson (and many others) the biggest challenge ahead is not technological, rather cultural.

“There’s a number of hurdles, and I think the biggest one or one of the biggest ones is just the status quo,” said Johnson. “We have a robust industry that’s been built upon 50, 100 years of operations and methodologies. When you bring new technologies forward, you’re first looked at with skepticism.”

He emphasizes the importance of continually evolving the technology. “Another of the hurdles is, to be honest …this is hard stuff,” said Johnson. “It’s not automation; automation today is usually more of a single signal data response, like say a governor on an engine. But this is autonomy and autonomy is many, many data streams coming together, more complex algorithms, prioritization of messages, data shedding, and a lot of these areas like, we bring machine learning and AI into our computer vision side of our product. Many of these are new fields of engineering.”

Autonomy for all
The Sea Machines approach to autonomy differs substantially, for example, from the automotive industry, where groups of technologists work on solutions for just one brand of vehicle, for example.

“When you look at other autonomy companies in other sectors, they’re usually wedded to a vehicle type,” said Johnson. “You have 250 autonomy engineers that are working at Tesla, and they’re building autonomous systems that work on a Tesla; or looking at one of our investors at Toyota, they probably have the largest autonomy team, but they’re building for Toyota.”

What Sea Machines has done is standardize its product, building a number of libraries for the interfaces to support, for example, the different propulsion types. When he looks at the commercial maritime sector, Johnson sees a massive but fragmented market, a market that looks more like the U.S. trucking market with thousands of smaller companies working alongside a smaller number of larger companies.

Sea Machine’s flagship product is the SM-300. “At the end of this year, we’ll release 1.8,” Johnson said. “We are product driven company with advanced technology at the core, but we really measure ourselves by our product. By the end of this year, we should be at system number 54 commitments, and well over 40,000 nautical miles (where) we’ve tested the system.”

Johnson’s team today is a team of 30, and he anticipates growing about 40%. Just as importantly, Sea Machines will soon launch a major new innovation. “Next year we’ll release our first computer vision as a sensor product. A big step to empower the technology further is to be able to perceive the environment better, get better situational awareness and for three years now, we’ve centered on vision. Our first computer vision sensor next year will first be available within our SM-300 system.” 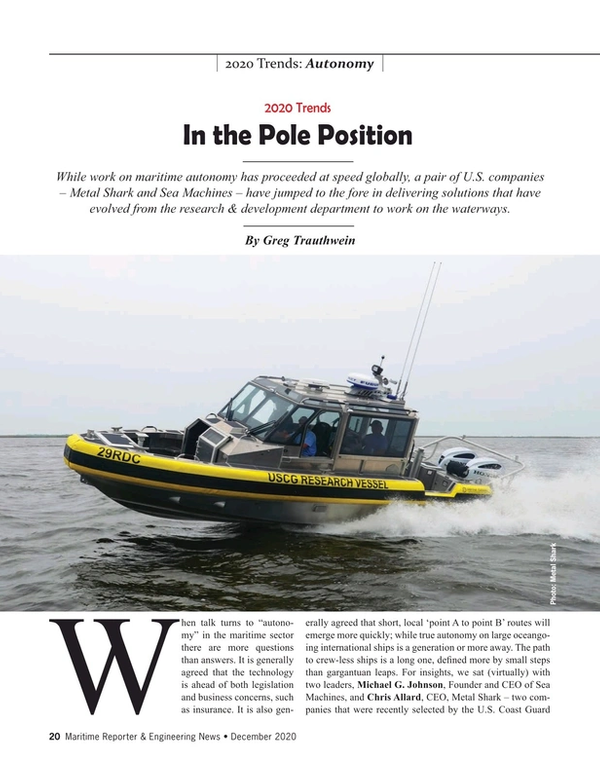