Ship Power: Out of the Past Comes Wärtsilä's Engine of the Future

Although the well-known Finnish company Wärtsilä has a very long history, it was founded in 1834, the diesel engine era begins when the company signs a license agreement with Friedrich Krupp Germania Werft AG in Germany. The first diesel engine sees the light of day in Turku in November 1942. From there on Wärtsilä passed a number of rapid expansions in all fields of products. Some of the products stayed and some disappeared. The concentration of being a full solution provider for the maritime industry started in the early 2000’s after lots of talks with potential customers worldwide.

Today Wärtsilä is a corporation which develops, manufactures and services power sources and other equipment in the marine and energy markets. The core products of the company include large diesel engines. As of 2012 they employed close to 19,000 workers in more than 70 countries and it is headquartered in Helsinki, listed on NASDAQ OMX Helsinki, Finland.

Wärtsilä says they are powering one in three ships and services one in two vessels sailing the world’s oceans. The company services the merchant, offshore, cruise and ferry, naval, and special vessel markets, and the offering includes ship design, main and auxiliary engines, auxiliary power systems, electrical and automation packages, propulsors (such as water jets, thrusters, propellers, and nozzles), seals, bearings, gears, rudders, scrubbers, boilers, and all related services, such as repair, configuration, upgrading, training, maintenance, and environmental services.

The Finnish engine manufacturer said it has more than 40 years of experience in marine gas applications and therefore featuring the leading position in dual-fuel engine technology. When equipping the LNG Carrier “Venator” with a low-speed dual-fuel 7RNMD90 engine in 1973, Wärtsilä (Sulzer) was way ahead of its time. The installation was successful in all aspects, but the market was not yet ready to endorse the concept. Still convinced of the potential that natural gas held, the company developed and successfully tested a high-pressure two-stroke gas engine in 1986. Again, the technology was proven but the Finnish company were once again ahead of its time, and the market was still not ready for it.

In the mid-1980s, the engine manufacturer also developed its first medium-speed high pressure gas engines, the GD series, targeting land-based and marine markets. In the 1990’s it added the SG and the DF series medium-speed gas engines. On this occasion, the timing was right. The superior technology and performance soon made, according to Wärtsilä, the market leader for medium-speed dual-fuel applications. Of these the DF marine installations alone have accumulated more than 1,000,000 running hours, with close to 60 vessels in service.
According to the company, recent trends in global shipping show natural gas becoming more and more attractive as the new fuel of choice. Early adopters in both the ferry and the offshore sectors have shown increasing interest in gas, especially when operating in environmentally sensitive areas and more stringent emission control areas such as the Baltics, Norway and the coastal waters of the U.S. Partly due to upcoming legislation for SOx and NOx-emissions, and also because of its increasing availability at an attractive cost level, this significant shift towards natural gas continues to gain speed, including the merchant shipping segment.

The Low-Pressure Dual-Fuel 2-Stroke Engine
Wärtsilä recently conducted full scale testing on gas of its low-speed 2-stroke dual-fuel engine and is now introducing a full range of engines based on its established and well-proven low pressure technology. The implications of this for ship owners and operators are such that the new engine is already being referred to as a game-changer for merchant shipping. The first engine using this technology, the Wärtsilä RT-flex50DF, will be available for delivery in the third quarter of 2014. The new low speed dual fuel engine of type RT-flex50DF comes as a 5, 6, 7, and 8-cylinder with power outputs, in gas-mode, from 4,775 kW at 99 rpm up to 11,520 kW at 124 rpm. Other engines from the company’s new Generation X series will follow and will be available for delivery during 2015 and 2016.

A Broad Range of Benefits
The entire portfolio of Wärtsilä 2-stroke engines will be available as low pressure dual-fuel (DF) versions. The benefits of this technology are significant. Compared to other technologies, studies show that Wärtsilä’s low pressure DF engines offer capital expenditure (CAPEX) reductions of 15-2%, the company says. This is achieved through a substantially simpler and lower cost LNG and gas handling system operating at pressures below 10 bar, and by the fact that no further exhaust gas cleaning systems are needed to meet future emission regulations. ”This is one side of the coin – but the other side of the coin is that the initial costs, just for the bare engine (without all the additional requirements to run the engine on gas), will be around 15 to 20% higher than comparable diesel engine,” said Rolf Stiefel, Sales Director, Wärtsilä Ship Power. The new engines are IMO Tier III emissions compliant in gas mode, and the minimum Tier II level is achieved with liquid fuel.
Furthermore, on the operating expenditure (OPEX) side, significant gains will be achieved with Wärtsilä’s technology. This is because no high pressure gas compression system external to the engine needs to be operated onboard the vessel, and NOx abatement systems are not required. Another main advantage is that the Wärtsilä technology allows stable operation on gas across the entire load range. This means that at low loads, there is no need to switch to diesel fuel as is the case with other technologies. In other words: with the new two-stroke RT-flexDF engine a pier-to-pier operation can be performed. Moreover, the consumption of pilot fuel is approximately just one per cent of the total fuel amount, and therefore much lower than with other technologies.

Key to Low Emissions
The key to such low emissions is the engine’s low pressure fuel system.  Instead of pumping gas at 200 bar into the engine near Top Dead Center (TDC), gas is ported into the engines mid stroke at less than 10 bar which allows the gas to mix thoroughly into the cylinder and subsequently burn more evenly.  This pre-mixed lean burn combustion process results almost in zero NOx emissions.  In addition, because this is a low pressure system, high pressure compression systems are not required.
Ingemar Nylund, Program Director Wärtsilä Research & Development, mentioned in his presentation that the flame created in a high pressure gas engine burns in a far different manner resulting in the creation of NOx at levels well outside the limits required by IMO Tier III. He said “In the RT-flex 50DF, the ignition process is started via the combustion of a 1% portion of diesel in a pre-chamber (located in the cylinder head). When in gas-mode, this portion of diesel is the primary contributor of NOx emissions.”
But what about the Methane Slip which has a strong impact on the greenhouse gas emission?
Ingemar Nylund explains: “When speaking about gas-powered engines, the emission of unburned fuel, and this is the so called ‘methane slip,’ into the atmosphere is always an important factor. It should be noted here, however, that methane slip, i.e. incomplete combustion of methane (CH4) in the cylinders, releasing methane on the exhaust side, will negatively influence the reduction of greenhouse gases significantly, and in worst cases eliminate the gains from CO2 reductions. In consideration of the fact that CH4 is more than 20 times more powerful than CO2 as a greenhouse gas, release of even small volumes of methane easily spoils the potential gains. But the “methane slip” inherent in the RT-flex 50DF engine is less than what is found in the equivalent four-stroke engine and still results in 25% less equivalent CO2 emissions, because the combustion has much more time to burn more completely, which is not the case in four-stroke engines. On top of this: the RT-flex DF engines have the potential to further reduce the methane slip by further developments, which means:  ‘Direct’ methane slip can be avoided by correct gas admission valve timing, the use of pre-chamber technology to have complete combustion and an optimized combustion space to avoid ‘dead volumes’.”

Wärtsilä’s low pressure gas system fulfills all safety requirements. Since low pressure gas technology is the standard for all four-stroke engine makers today, the merit of this concept is clearly proven.  “The benefits of the new low pressure dual-fuel technology for two-stroke engines are significant. Describing this as a game-changing development for merchant shipping is certainly no exaggeration, since the many advantages of being able to use gas and LNG as primary fuel are now, for the first time ever, available to virtually all vessel types. Our well proven technologies for both the engines and the onboard gas and LNG handling systems, can now be applied to this wider market. With the adaption of low pressure dual-fuel technology to two-stroke engines, Wärtsilä brings the proven advantages it has demonstrated in the four-stroke, medium-speed DF engine market to its two-stroke low speed engine customers,” said Mr. Martin Wernli, Vice President, two-stroke, Wärtsilä Ship Power.

Leading in DF Engine Tech
Wärtsilä pioneered the development of dual-fuel engine technology, and is today a leader in this field. Throughout the years, Wärtsilä’s R&D work has focused heavily on these technologies. The company successfully introduced its low pressure dual-fuel engine technology for four-stroke engines for land based applications in the 1990s, and for marine applications soon afterwards. Since then, the company has delivered more than 1,000 such dual-fuel engines accumulating more than seven million running hours.
The application of natural gas as a widely accepted fuel for merchant shipping is likely to become a reality in the near future. The environmental benefits and attractive pricing that gas offers are expected to drive demand, with a resulting increase in market share for gas fuel. By introducing low pressure two-stroke DF engine technology, the Finnish engine manufacturer is accelerating this major trend since it makes the application of gas as a marine fuel easier and safer for owners, operators and yards. Wärtsilä envisages that by 2020, more than a quarter of the ordered vessels could be designed to run on gas fuel.

(As published in the December 2013 edition of Maritime Reporter & Engineering News - www.marinelink.com) 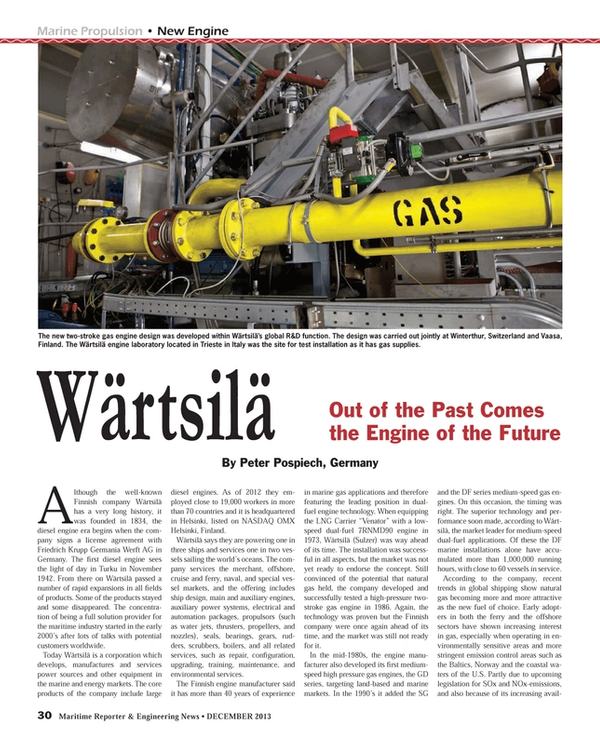 Read Ship Power: Out of the Past Comes Wärtsilä's Engine of the Future in Pdf, Flash or Html5 edition of December 2013 Maritime Reporter