Foreign players continue to dominate several segments of the Indian maritime industry: from salvage to dredging, chartering to ship management and ship manning, to name but a few. And the list of foreign firms setting up shop in India is growing as the country is hurriedly putting in place the required infrastructure to meet the huge demands of India’s growing international trade.

Globally, India is the 7th largest country in area, 2nd in population and 11th in GDP, with the expectation that it will ascend to the top five in GDB by 2020. The country is blessed with a 4,700 mile coastline, making it one of the longest in the world not forgetting the 14,500 km of navigable inland waterways, the 12 major ports and 187 minor ports well spread along the 4,700 mile coastline play a pivotal role in the maritime transport helping in international trade.

Major and Minor Ports (non-Major Ports) are defined not by size but by how they are administered. The “Major Ports” are administered by the Central Government whilst the non-major ports are controlled by the concerned State’s Government, either directly or through State Maritime Boards. Major ports (except Ennore) are trusts which fall under the Major Port Trust Act of 1963, whilst the minor ports are corporate entities, and can be private companies.

The largest private port is Mundra in the State of Gujarat and the largest Major Port is the Jawaharlal Nehru Port (JNPT) where there are a number of terminals being operated on lease. Tariffs for the Major Ports are currently set by TAMP (the Tariff Authority for Major Ports) but there is a move to allow the major ports to follow the practice of the non-major ports which set their own tariffs.

The Indian government is promoting public-private partnerships (PPPs) as an effective tool for bringing private-sector efficiencies for delivery of quality public services. India, in recent years, has emerged as one of the leading PPP markets in the world, because of several policies and institutional initiatives taken by the government. These include 100% FDI (foreign direct investment) being permitted under the automatic route for port development projects and 100% income tax exemption for a period of 10 years.

Port traffic has increased from 368 million tons in 2001 to 935 million tons in 2013. According to the ‘India Maritime Agenda’ port throughput is expected to increase to 2,500 million tons by 2020. The Port sector witnessed FDI equity inflow of USD 1.6 billion during April 2000 and June 2012 as per Department of Industrial Policy and Promotion (DIPP).

The Indian Government plans to bring a new orientation to encourage greater participation by the private sector in developing port activities and operations. This goal is planned to be achieved through numerous initiatives and policies. Many international port operators are invited to submit competitive bids for BOT terminals on a revenue share basis, which has attracted foreign players. The National Maritime Development Plan (NMDP) has been set up by the Indian government to improve facilities at all the 12 major ports in India mainly through PPP.

The cargo growth outlook for the Indian port sector continues to be strong over the medium to long term driven by the domestic requirements of coal, for power and other sectors; crude oil, for meeting domestic petroleum requirements; and containers, given the cost and logistical advantages associated with containerization. Some near term uncertainty may, however, be associated with particular cargo categories like imported coal, due to uncertainties plaguing the power sector and persistent delays in execution of green-field power projects; iron ore, due to unresolved policy issues; and containers, due to the weak global environment affecting EXIM trade.

With respect to new capacity additions, progress on the award of projects at major ports, including PPP projects, was better in FY 2013 compared with the previous year. A total of 32 projects could be finalized and awarded in FY 2013 compared with 3 projects in FY 2012, though this fell short of the planned target of 42 projects. Despite the uptick in project awards, actual implementation of these projects could see further delays, as was seen in the case of projects awarded during the previous years at major ports.
Making a cautious remark about the PPP model, Shashank S. Kulkarni, Secretary General of the Indian Private Port and Terminal Association says, “Though PPP in the port sector took off in a successful manner in 1998, the current trends do not portray a healthy picture. Like road development this segment too, seems to be struggling hard for survival, the reasons for which are well known. The Ministry of Shipping, government of India, has therefore very aptly constituted a high level group to undertake a systematic study of the port sector PPP initiatives.”
The progress with respect to capacity creation by way of green-field non major ports also continued to be slow with very few of these moving from proposal to implementation phase owing to a host of issues including problems in land acquisition; environmental and other statutory clearances; issues in financial closure, etc. Given that no near term resolution of these structural problems appears to be in sight, the capacity addition at Indian ports is likely to fall short of envisaged targets and demand requirements. As a fallout, the major ports, most of which are already operating at peak capacity, are likely to continue facing capacity and efficiency constraints while the incumbent non major ports, by virtue of their superior cargo handling infrastructure, investment in large capacity creation and high operating efficiency, would be well placed to wean traffic away from major ports as well as to garner a larger proportion of the incremental cargo generation.

The Indian government has decided to create a minimum depth of 14 meters at all the 12 ports that it owns, where depths range from 9 -12 meters. The global average is 12-23 meters, enabling the latest generation containers, tankers and dry bulk ships to come calling. The dredging requirements of Indian ports are assessed at over 1,100 million cubic meters with plans to increase draft levels at major ports to at least 14 meters. Major ports alone are targeting an investment of over $1.5 billion in dredging.
All major dredging contracts are awarded to global giants and almost none to Indian operators because of their very limited capacity. When it comes to granting dredging contracts in India, Indian players are given a wide berth according to Hemant Rao of Meka Group. “It has become a policy to allow a global major to walk away with most of the dredging contracts in the country unlike what is practiced in the U.S. and other countries. In America dredging contracts are given solely to U.S. companies, and the bidder has also to ensure he deploys dredgers made in the U.S. and manned by Americans only. Indian companies are never given any such preferential treatment in their own country.”

Salvaging too pictures a similar scenario. “Salvage industry in India is still at a nascent stage,” said Capt. Sandeep Kalia, Executive Director, GOL Salvage Services Ltd, which is the only salvor in India to have acquired full membership of the International Salvage Union. “International Salvors had dominated this niche sector and entry of Indian companies was almost limited. It is the lack of support or encouragement from the government to promote national companies, the Indian Laws with respect to Salvage & Wreck Removal and the cut-throat competition that deters prospective Indian players from entering this business.”
The ports sector in India also needs to expand substantially to meet the growing demands in the country and the ambitions of the government. Bureaucracy hampers decision-making at both the Union and state government level and the gestation period for new projects can be lengthy. However, private sector projects are progressing especially in the more progressive states, and there are some very dynamic Indian companies as well as established international terminal operators who are progressing new projects; both green-field and within established operations.
Private companies interested in private port developments include Adani, Marg, Gammon, Essar, Tata and IVRCL. These companies are open to contracting with international businesses in specialist areas and some have already established contacts with overseas companies. Many of the established international terminal operators are also active in the country. Without a local partner or representative, it will be very difficult to succeed in business in India, and companies looking to do business in the sector are recommended to seek advice on the appropriate establishment prior to the commencement of operations.
Vizag Seaport Ltd.

(As published in the December 2013 edition of Maritime Reporter & Engineering News - www.marinelink.com) 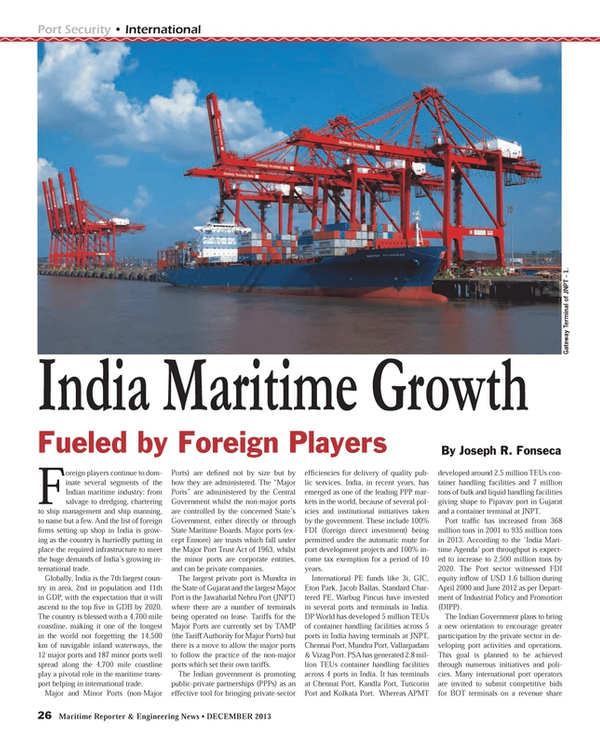