Careful ... Your TBT May Be Showing

If you thought hull anti-fouling systems were boring (think Teredo worm), then you haven't been paying attention to the controversy surrounding use of organotin compounds on the underwater hulls of ships.

Fouling has been a problem for ships since time immemorial. The Teredo worm (scientific name: Teredo navalis) was recognized as one of most threatening of marine fouling organisms because it bored into the hulls of wooden ships, potentially damaging watertight integrity. Other fouling organisms adversely impacted the speed of ships. Naval and merchant vessels responded by regularly scrapping the hulls (generally by careening the ship) and by placing sheathing on the underwater hull. Copper sheathing was the most common, particularly by the Royal Navy, and it was discovered that copper not only protected against the Teredo worm, but also reduced accumulation of seaweed, thus improving sailing performance.

When ship hulls began to be built of metal, concern about the Teredo worm waned. Hulls, though, were still subject to other fouling problems.

Eventually, manufacturers developed specialized paints or coating systems for the underwater hulls that reduced the accumulation of fouling. The paints that worked best were those containing tin or a similar metal. It was found that tin in the paint slowly leached from the paint surface, impeding growth of seaweed, barnacles, and other marine organisms. The scientific name for these tin-containing compounds is "organotins". The most commonly- used organotin is tributyltin (abbreviated TBT). TBT has become a short-hand reference for all organotin compounds. Tributyltin compounds recently have come into use as biocides in other areas, including disinfectants and preservatives for wood, cotton textiles, paper, and household paints.

The problem with organotins is that they are too effective. They have proven extremely good at keeping modern ship hulls relatively free of marine fouling (thus, maintaining efficient passage through the water) and long-lasting (thus, reducing maintenance costs). The tin that is leached into the water, though, tends to accumulate in various marine plants and animals that were never intended to be affected by the paint. This persistent pollution problem resulted in calls, starting in the 1980s, for a global phase-out of use of the product on ship hulls.

In October 2001, nations attending an international conference called by the International Maritime Organization (IMO) in London adopted the International Convention on the Control of Harmful Antifouling Systems on Ships, 2001 (AFS Convention). The Convention officially will enter into force 12 months after it has been ratified by a minimum of 25 nations representing 25% of the world's merchant shipping tonnage. As of this writing, the AFS Convention has been ratified by five nations (Antigua & Barbuda. Denmark, Japan, Nigeria, and Norway). Another seven nations (Australia.

Belgium. Brazil, Finland, Morocco, Sweden, and the United States) signed the Convention "subject to ratification", meaning that they intend to ratify after enacting appropriate domestic legislation. Five other nations (Greece, Italy, Panama, Spain, and the United Kingdom) have stated that they intend to ratify in the near future. In April 2003, the European Parliament and Council adopted a regulation prohibiting use of organotins compounds on ships. This regulation effectively obligates nations that are members of the European Union to adopt comporting legislation. There is thus little doubt that the AFS Convention will come into force in the foreseeable future.

The AFS Convention, as of January 1, 2003, prohibits application or re-application of organotin compounds on hulls of ships engaged in international commerce. Not later than January 1, 2008, ships that had organotin compounds applied to their hulls prior to January 1, 2003, must either have the material removed or have a protective coating applied to prevent further leaching of the compound into the water. Ships found to be in compliance are to be issued an International Anti-fouling System Certificate.

Guidelines have been developed by the IMO for test methodologies to determine if ships are in compliance with the AFS Convention. Under these guidelines, the maximum allowable level of organotin compound is set at 2500 mg of organotin per kilogram of dry paint. Paint samples are to be taken only at hull sites where the coating system is intact and sampling from damaged areas is to be avoided. Draft guidelines have also been prepared for future use by port state control officers.

At the same time, the U.S. Environmental Protection Agency (EPA) has prepared a draft Notice of Ambient Water Quality Criteria Document for Tributyltin (TBT). When finalized, the criteria can form the basis for state and tribal water quality standards. The agency has also developed a methodology for determination of organotins in waters and biological tissues by means of micro-liquid chromatography- electrospray ion trap mass spectrometry. The EPA has severely restricted use of tributyltin compounds in the United States. Both California and Alaska have placed restrictions on use of organotin compounds. Various countries, including, but not limited to, Canada, Sweden, the United Kingdom, the Netherlands, Japan, Hong Kong, and Australia have also put restrictions in place. Companies worldwide have largely stopped producing and distributing anti-fouling paint containing organotin compounds.

The result is that the AFS Convention has largely come into force de facto, if not yet de jure.

There are various implications of the banning of organotin compounds as anti-fouling agents that deserve consideration.

No equally effective alternative has yet been brought to market. The result is that ship owners and operators will pay more for new hull coatings that don't work as well and generally have to be renewed more frequently that the old coatings. The hulls of these ships will accumulate more fouling than before, with the result that the ships will have to use more fuel to maintain the same speed through the water - burning more fossil fuel and causing more air emissions.

A potentially more troublesome problem relates to another environmental issue - nonindigenous species. While a great deal of attention has been devoted to the transport of nonindigenous species by means of ballast water, there is a growing body of evidence to show that species attach to and are transported on the exterior hull of ships and other water craft with equal effect. As those hulls become more susceptible to attachment by aquatic species, we may be trading one environmental problem for another - the law of unintended consequences.

Eventually, all the organotin compounds that have been applied to ship hulls over the years must be removed, either in shipyards during maintenance or in scrapping facilities. Care must be taken to prevent the re-introduction of these compounds into the environment.

The U.S. EPA, in its Ship Scrapping Guide, notes the problem and provides some guidelines on measures that should be instituted to minimize this risk.

Potential problems for ship owners and operators, in addition to the added expenses noted above, relate to port state control inspections. For those ships where the old TBT-based coating is sealed, rather than removed, a port state control officer, on sufficient grounds, may conduct examinations.

This may include the taking of samples, which can be both time-consuming and expensive.

Unless the samples are taken properly and analyzed properly, the results may be misleading.

Analysis is complex and requires sophisticated equipment utilized by trained personnel. Only time will tell if the port state control regime is uniform, reasonable, and accurate.

The bottom line is — if your hull has been coated with TBT in the past - watch your bottom. 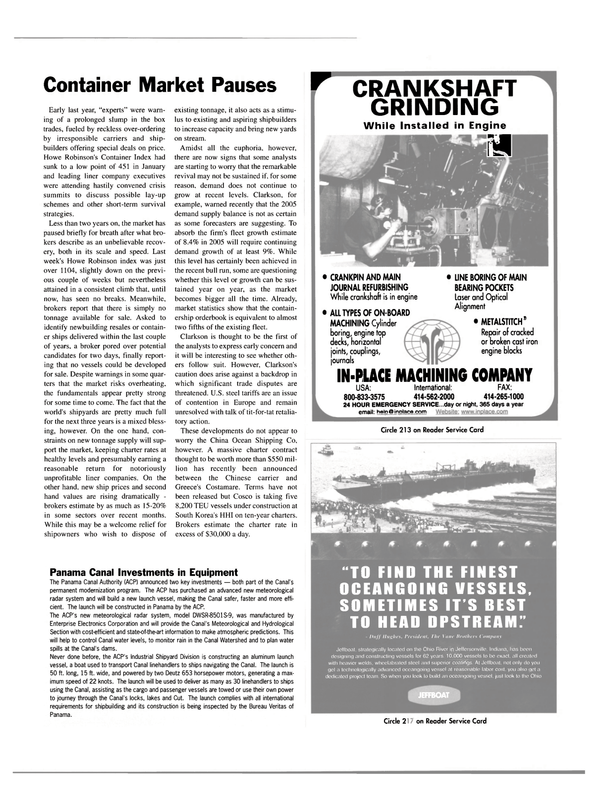 Read Careful ... Your TBT May Be Showing in Pdf, Flash or Html5 edition of December 2003 Maritime Reporter

Other stories from December 2003 issue