Congress, in late October, appropriated $900 million to fund a new fast sealift program. When added to the $375 million remaining from last year, a total of $1.3 billion is now available for initiating a major ship construction effort. High priority has suddenly been accorded sealift— and it is highly likely that this program will proceed on an accelerated basis over the next year.

dustry over the next six to 12 months. All of these ships will be built to commercial standards—allowing the maximum participation by equipment manufacturers.

Current Sealift Inventory The U.S. Navy has an inventory of more than 60 sealift ships. Until the Kuwait invasion, about onethird of these ships had been in active service carrying dry and liquid cargoes for the military. Another third were deployed in forward locations— loaded with equipment and supplies which were intended to be available to troops flown to meet military emergencies. The remaining third were rapid deployment ships maintained in ready reserve status. Exhibit 1 lists ships currently in the military sealift inventory.

Many of the ships in this inventory have been added during the early 1980s. The Navy funded a major effort to build a prepositioned/ ready reserve fleet as a result of the Iran hostage situation. The program included acquisition of eight Sea- Land containerships for conversion to fast sealift ships, construction and/or conversion of 13 prepositioning RO/RO ships, conversion of two tankers to hospital ships and acquisition of five T-5 sealift tankers.

Currently, there are no additional ships on order.

Sealift Planning DOD's need to respond to military emergencies in distant locations drives the requirement for sealift capability. Essentially the Department of Defense plans its requirements around the amount of tonnage needed to be delivered immediately following a deployment decision.

Sealift ships have never been a glamorous activity to Navy planners.

Given the choice of spending scarce funds for combatant ships or sealift ships, the Navy will invariably choose the former. As a result, it has largely fallen on Congress to initiate requests for sealift ship construction.

Background of New Program The decision to build more sealift ships began last year when Congress appropriated $600 million in the FY '90 budget for this purpose. Congress acted in response to concerns that the U.S. had insufficient sealift capability. However, DOD subsequently reprogrammed some of these funds to pay for the military action in Panama and refused to release the balance to begin the program.

Then Iraq invaded Kuwait and suddenly sealift became a high priority to defense planners. As a result, Congress authorized a new fast sealift ship construction program for FY 1991 and appropriated an additional $900 million for this effort. Following is the text of the report accompanying the appropriations legislation dealing with the sealift program: Congressional Directive For The Sealift Program "The House bill included a provision (sec. 1324) that would establish a program for the construction and commercial operation of commercially viable cargo vessels that incorporate features essential for military utility of the vessels in time of war or national emergency. The report accompanying the House bill (H.

Rept. 101-665) suggested a specific design for the ships constructed under the program.

"The conferees agree to establish a fast sealift program for the construction and operation of cargo vessels that incorporate features essential for military use of the vessels.

The Secretary of the Navy would be responsible for the design and construction of the vessels after consultation with the Administrator of the Maritime Administration.

"Two reports would be required.

The first would be on the plan for the fast sealift program and would be required within six months of enactment of this bill. The second would be a report of activities under the program and would be required three years after enactment. The conferees expect that fundamental decisions on the nature of this program will be made within six months, which should be sufficient for the selection of design options and for completion of an updated mobility study, required under section 909 of this bill.

"The conferees agree not to recommend a particular design for ships built under the program." (Source: FY 1991 Defense Appropriations Conference Report) Current Plan The Navy is responsible for design and construction of these ships—with MarAd in an advisory role. The ships are to be built to commercial specification. They can either be dedicated for military use or leased for commercial operation— at the Navy's option. A detailed plan of action is required to be prepared by April 1991.

There are two basic hurdles.

First, DOD must release these funds to the Navy—a problem in the past.

Second, funding which has been provided must survive potential reprogramming actions resulting from spending constraints.

Design Features The ships are to have RO/RO capability and be able to transport one heavy Army division. Current planning calls for 120,000 bhp on two shafts with CPPs. The Navy is currently studying prime mover options which include diesel electric, geared diesel, direct drive diesel and CODAG plants.

Acquisition Actions The Navy, with MarAd and other input, will first decide on specific performance requirements. NAVSEA will then prepare a contracting package—inviting offers through issuance of a circular of requirements.

It is likely that competing design contracts will be awarded to three or four teams—with one or two of these teams selected for the construction contract.

The construction contract is likely to be fixed price, probably with an incentive provision. Commercial standards will apply to most equipment.

Only U.S. yards will be eligible to compete for construction. The contract terms may include a requirement for full or partial domestic production of prime movers.

Points of Buying Influence A procurement of this magnitude involves a complex set of players.

The Deputy Chief of Naval Operations for Logistics (OPNAV 04) will develop the performance criteria for inclusion in the circular of requirements.

USTRANSCOM, MTMC and MSC will provide input for commercial viability.

The Naval Sea Systems Command (NAVSEA 377) will manage the program. NAVSEA 05 will perform design and engineering—with assistance from the David Taylor Research Center, MarAd and support firms. NAVSEA 02 will handle the contracting. 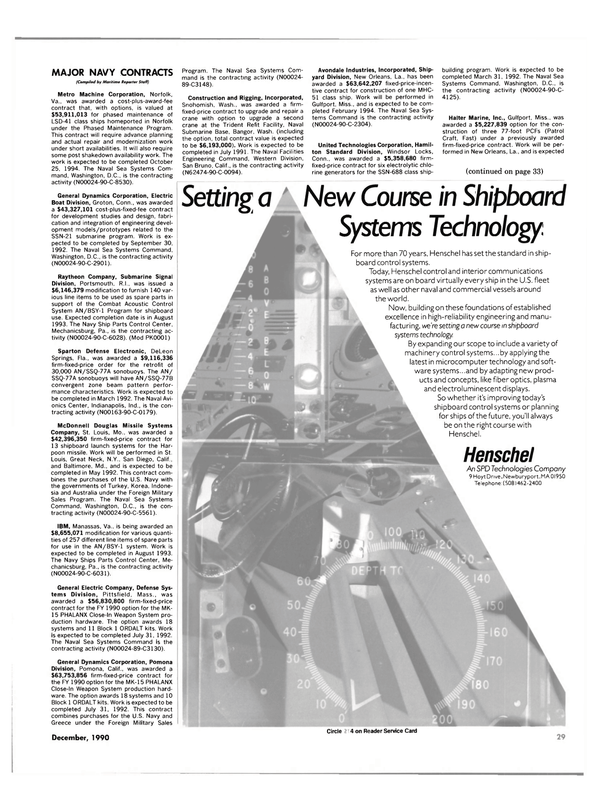