NAVY PROGRAM OFFERS BILLIONS IN SALES OPPORTUNITIES TO SUPPLIERS The U.S. Navy has clearly become the dominant customer for marine suppliers and shipyards in this country. While the pace of new projects has slowed, Navy continues to provide a flow of new business op- portunities for shipbuilders and ship system manufacturers.

This article gives an update of the Navy business developments and future opportunities. It is based on information provided on a continuing basis to subscribers to IMA's quarterly business reports on Navy procurement and maintenance business.

Details are available from IMA.

1. STATUS OF NAVY SHIPBUILDING Programs of most interest to shipbuilders are new starts planned in the near future. They include the SSN 21, LSD 41 cargo variant, a new class of oceanographic ship, jumboization of the AO 177 fleet oiler and procurement of a new class of high speed patrol boat.

Equipment suppliers should also be interested in programs which have moved to early production.

They include the DDG 51 Aegis destroyer being built by Bath and Ingalls, the TAO 187 fleet oiler now being built by Avondale and PennShip, and the AOE 6 fast combat ship under construction at NASSCO.

Even selected mature programs offer business opportunities to equipment manufacturers. They include the CVN aircraft carriers on order and planned, the CG 47 Aegis cruiser program finishing up at Ingalls and Bath, and the Trident submarine program at General Dynamics- Electric Boat.

The status of key shipbuilding programs is summarized in Exhibit 1.

2. FUTURE FUNDING OF SHIP CONSTRUCTION The Navy proposed to build 16 ships and perform four major conversions in FY 1988. At time of preparing this article there had been no resolution of the FY 1988 budget.

But the actions taken thus far by Congress clearly indicate a reduction is expected.

The House and Senate authorization bills provide for construction of 13 ships. Major change is in the Aegis surface combatant program.

Both House and Senate deleted the DDG 51's from the program—but instead authorized five CG 47's.

In late October the House approved a defense appropriations bill. It makes cuts in funding for ship construction. The House bill provides funding for two Aegis ships—denying the request for three DDG 51's. It also denies funding for the MCM minesweeper in FY 1988 and cuts the crane ships conversion plan.

The House appropriations bill contains some interesting items. It orders a study to be made by Navy of a build and charter program for strategic sealift tankers. The bill also requires the Navy to conduct "a full and open competition for the fiscal year 1989 DDG 51 ships and the awarding of at least one ship to a third shipyard." Navy can be expected to oppose this requirement and attempt to have it deleted in the final House/Senate appropriations bill language. Another interesting item in the House bill is a request that the Navy consider an alternative design for the LSD 41 cargo variant. It requests that the Navy "examine the viability and cost effectiveness of a modified SL- 7 design, with LM 2500 engines as a cargo variant." Details on the FY 1988 shipbuilding funding request and Congressional action to date are shown in Exhibit 2. Note that the Senate had not yet acted on a defense appropriations bill—and cuts resulting from deficit reduction negotiations are expected to affect the final defense budget.

3. FUNDING OF SHIP SYSTEMS AND EQUIPMENT The President's budget requested $22 billion to fund weapons, other procurement and provide funds for research and development in FY 1988. Both House and Senate have authorized reduced programs.

In late October the House passed a defense appropriations bill making serious cuts in this portion of the Navy budget. The total was cut from $22 to $19 billion.

The House appropriations bill contains some items of particular interest to marine suppliers. It includes an additional $10 million to be used "solely for the purchase of U.S.-built, totally enclosed survival systems." These will be state-ofthe- art survival systems for use on civilian manned T-ships operated by MSC. Another item is an additional $12 million for the continued dual source procurement of seasheds and adapters.

A new buy American provision is also contained in the House appro- priations bill. It prohibits using funds to procure welded anchor chains and mooring chains four or less inches in diameter outside the United States or Canada.

Exhibit 3 summarizes the status of FY 1988 funding for Navy weapons, equipment and systems as of early November.

4. SHIP MAINTENANCE The Navy plans to perform 34 overhauls, 113 SRA's and 68 PMA's in FY 1988. This work will be performed in both private and naval shipyards. It represents the major source of business to shipyards in this country.

IMA's analysis of the Navy maintenance work profile indicates 16 active fleet and three NRF ship overhauls will be contracted to commercial yards in FY 1988. The remainder of overhaul work will either be performed in naval shipyards or made part of the public/private competition.

Navy is directed to limit interport differentials on the West Coast to "only those historical foreseeable costs which can accurately be estimated— fuel to transport such vessels to the port of repair and to pay for the onboard crew en route. The bill also continues to prohibit overseas ship maintenance for ships normally homeported in the United States, except for voyage repairs.

Requested funding for ship maintenance and modernization along with appropriation action to date is shown in Exhibit 4. The ongoing negotiation to reduce the budget deficit in FY 1988 and future years will likely have significant impact on actual maintenance funding. 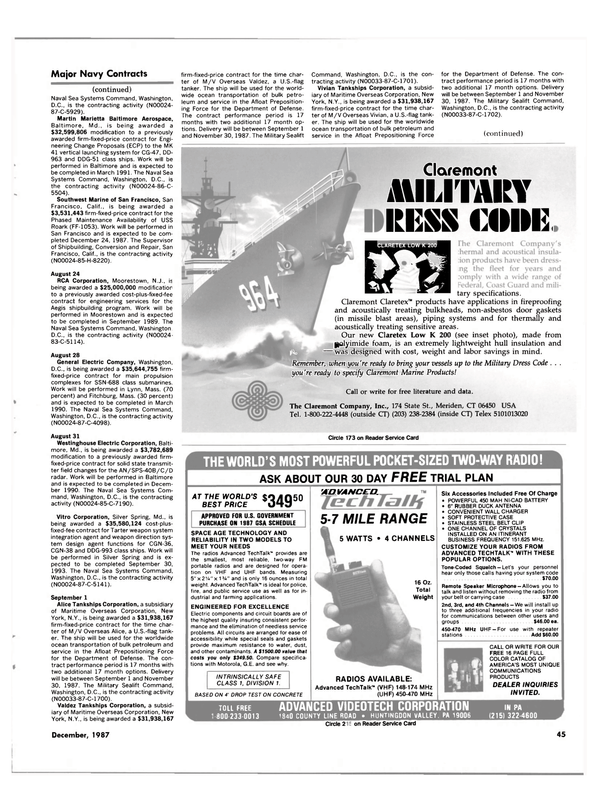 Other stories from December 1987 issue