An Update On Market Developments International Maritime Associates, Inc. publishes quarterly market assessments of Navy ship and ship systems procurement. This article is an excerpt from the November quarterly review. Information in this article is current as of November 1.

EDITORS NOTE: This Article is not the full quarterly report. It is an excerpt and represents less than 15 percent of the actual data contained in the complete review.

Both shipbuilding and ship systems/ordnance procurement are addressed. Each reviews contains a hard hitting assessment of specific programs, lists all major contracts awarded by the Navy, identifies future market opportunities and provides a current directory of key Navy contacts.

More than 220 companies now subscribe to IMA's quarterly market review. The price of a one year subscription is $380. The market review can be ordered by contacting, International Maritime Associates, Inc., 3050 K Street N.W., Suite 345, Washington, D.C. 20007, (202) 333-8501 SHIPBUILDING AND CONVERSION The Navy requested funding for 24 ships in FY 1987. Congress authorized and appropriated funds for 21 ships. Details are shown in Exhibit 1.

Aegis Ships (CG and DDG) Funds were provided to build three CG-47 cruisers and two DDG 51 destroyers. Three DDGs were authorized— but only two have been funded. One of the FY 87 DDGs is to be awarded to a second source builder. Todd, Ingalls, Avondale and NASSCO are planning to bid on the follow ship contract.

Coastal Minehunter (MHC) Reflecting strong political pressure, the Navy developed a fall back plan to build all MHCs in the U.S. A U.S. division of Intermarine (Italy) will receive the lead ship contract.

The Navy had wanted to build the first ship overseas and phase in production in this country. The appropriations conferees instructed the Navy to use FY 1986 MSH funds for this program "provided that all MHC ships are built in the U.S. and that the follow-on ships be awarded competitively and selected by the Navy." Fast Combat Support Ship (AOE) House/Senate conferees agreed to provide $499 million for construction of the lead AOE. The Navy requested $613 million. The Senate had earlier rejected the AOE on the basis of funding constraints.

Meanwhile, proposals to build the AOE were submitted on October 31.

The contract will be for one ship with three option ships. The contract award is planned in late December.

Oceanographic Ship (AGOR 23) This year's budget provides $33 million to build an oceanographic ship. A circular of requirements (COR) providing required performance parameters is to be issued this month. Proposals will be submitted in May. The contract award is planned for next August or September.

Coastal Hydrographic Vessels (TAGSC) The Navy was given $35 million to procure and convert fishing boats for use as hydrographic vessels.

They are being referred to as mini- TAGS and will be used for oceanographic use.

A circular of requirements (COR) will be issued inviting owners of fishing boats or small freighters to submit proposals. The conversion contract will probably be awarded in 10-14 months.

This is $50 million more than the Navy's request. The conferees directed the Navy to "examine the possibility of using a portion of these funds to take advantage of a unique opportunity to acquire a roll-on roll-off vessel built in the United States (in) 1975 which is a sister ship of vessels already in the reserve fleet." New Carrier(s) The Navy is understood to have included long lead item funding for a new aircraft carrier in the FY 1988 budget request. Funding may be requested for two sets of long lead items. The Navy now has 15 carriers in active service and two under construction.

The proposed new carrier^) would be delivered in the late 1990s and replace older ships now in service. Newport News will be the major beneficiary of this funding.

SWATH TAGOS McDermott was the successful bidder for the lead SWATH design TAGOS. Its price of $25.4 million is understood to be significantly under the next lowest bidder. The Navy plans to buy nine of these twin-hull ships.

Funding Recisions The appropriations conferees agreed to rescind $1.3 billion in prior year shipbuilding and conversion funding. Actual costs to build ships are running significantly below estimated costs and Congress decided to recover some of the excess funds for ships contracted over the past four years. The Navy ship funding recisions represent 24 percent of total defense funding recisions ordered by the appropriations conferees.

A major portion ($338 million) of ship funding recisions was directed at the LHD program. The award of the LHD follow ship contract was made in mid-September—in time for the appropriation conferees to note an award price $300-400 million under Navy expectation.

WEAPONS AND SHIP SYSTEMS The Navy requested $23.2 billion in FY 1987 for development and procurement of weapons and ship systems. Congress appropriated $20.7 billion. Details are shown in Exhibit 2.

The current status of individual programs, analysis of contract awards, updated names and phone numbers for key contracts, and other business data are provided in IMA's November quarterly report. 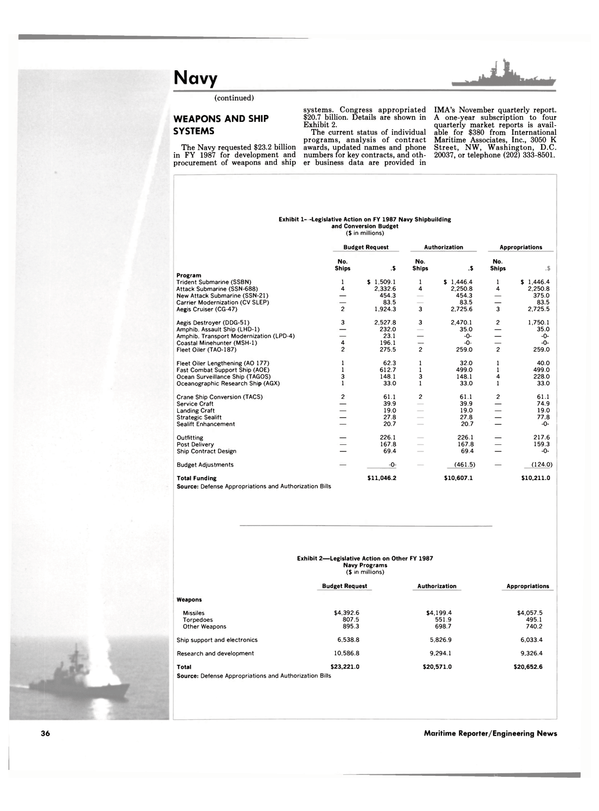 Other stories from December 1986 issue