The City of Memphis has received and placed into service a fireboat made by MonArk Boat Company of Monticello, Ark. The fireboat, MonArk's Model 2609, will be used by the Memphis Fire Department in responding to waterfront fires and emergencies on the Mississippi River.

The Memphis fireboat and its transporter trailer, also manufactured by MonArk, were delivered to the city in June.

The Memphis craft is the first fireboat of its size produced in the U.S. containing three diesel engines for propulsion and pumping requirements.

The diesels were chosen as the propulsion system so that additional hazards would not be encountered by the use of gasoline engines. The boat was constructed in accordance with the specifications and design requirements of the Fire Department for the City of Memphis.

The all-welded aluminum hull, combined with the twin Cummins Model 6BT 5.9-litre marine diesels enables the boat to achieve a cruising speed in excess of 27 mph. In addition to the twin Cummins propulsion engines, the main pump systems are powered by a Cummins Model 6BT 5.9 litre'diesel. These are the first Cummins engines of this model and type installed in a workboat application.

The fire-fighting systems are powered by Hale Model 60F.J-M pump rated at 1,200 gpm. The boat is equipped with a forward deck monitor, Elkhart Model 294-1IX rated at 1,100 gpm; the monitor is equipped with a CSW Select-OFlow nozzle and foam stem. Two spill fire protection sprays, Elkhart Model NTL-CF 1 inch, are located under the forward deck with a remote control at the operator's console.

The boat contains a 100-gallon foam tank capable of discharging 3 or 6 percent concentrate through the forward monitor or spill protection nozzles. 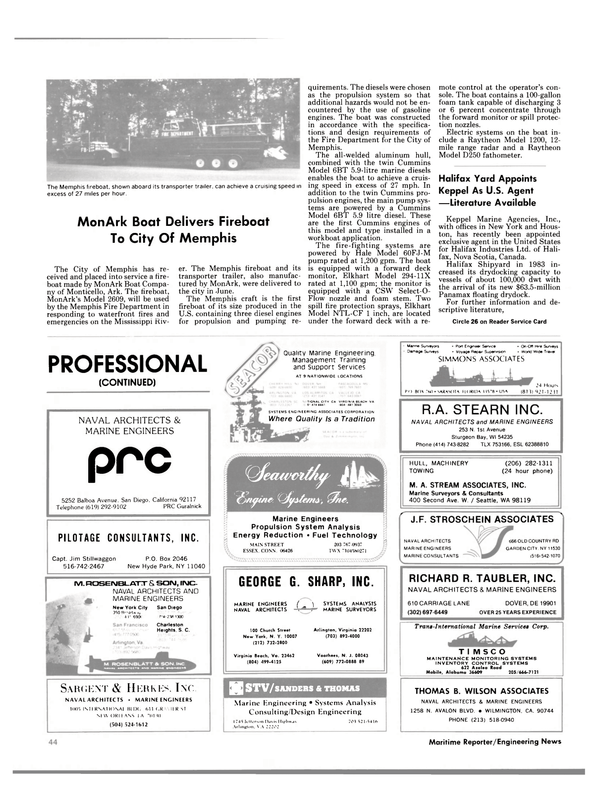 Other stories from December 1984 issue