The award was established by the American Institute of Merchant Shipping in honor of the late Rear Adm. Halert C. Shepheard, who served in the United States Coast Guard as Chief, Office of Merchant Marine Safety, and was internationally acclaimed for his work in the field. The award is administered by the American Bureau of Shipping, and was presented to Rear Admiral Murphy by ABS chairman Robert T. Young at the Bureau's annual Board of Managers dinner held at the New York Yacht Club on November 9.

The award cited Rear Admiral Murphy as "a leader, administrator, delegate, and spokesman (who) has shown a widely respected lifelong concern for and dedication to merchant marine safety." A graduate of the Webb Institute of Naval Architecture, Rear Admiral Murphy joined the Bureau of Marine Inspection and Navigation in 1935, and became Chief of the Hull Technical Section in 1939. The Bureau's functions were transferred to the United States Coast Guard in 1942 and Rear Admiral Murphy advanced there to Chief, Merchant Marine Technical Division, and subsequently, Chief, Office of Merchant Marine Safety.

During his Coast Guard career, Rear Admiral Murphy represented the United States in various international maritime safety forums. He was a member of the U.S. delegation at the Conference on the Safety of Life at Sea in 1948 and 1960, when he also served as U.S. spokesman on the Nuclear Power Committee. Between 1959 and 1970, he attended numerous meetings of bodies of the Inter-Governmental Maritime Consultative Organization (IMCO), including sessions of the Maritime Safety Committee, Council and Assembly. In 1968 and 1969, he was elected chairman of the IMCO Maritime Safety Committee. In 1969, he also served as chairman of the U.S. delegation to the International Conference on Tonnage Measurement of Ships.

Rear Admiral Murphy has served as chairman of the Ship Structure Committee, and is a member of the Technical Committee of the American Bureau of Shipping. He is the author of "Lifesaving Equipment and Aids to Navigation," a chapter in the book, Design and Construction of Steel Merchant Ships. 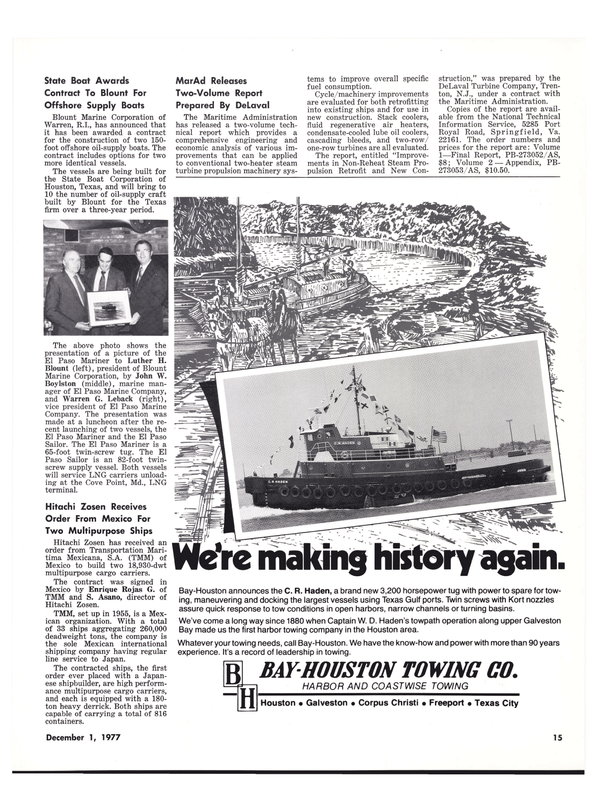 Other stories from December 1977 issue