US Inland Waterways: Cheer the Year!

As we head toward the end of a very chaotic and COVID-filled 2020 and try to reflect on the positives, the inland waterways had a pretty good year overall. Waterways Council, Inc. (WCI), whose members depend on a modern, efficient inland waterways system, offers this look back, with hopes ahead for the passage of a Water Resources Development Act (WRDA) 2020 with our construction cost-share adjustment priority in the lame duck session of Congress.

A disappointing FY21 budget request
In February, the Trump Administration released its Fiscal Year 2021 (FY21) budget that proposed a 22% cut to the U.S. Army Corps of Engineers’ Civil Works budget to $5.967 billion, representing a $1.7 billion cut from the previous fiscal year’s (FY20) level enacted by Congress.

Beyond the reduction to the Corps’ budget, most disappointing in the budget was a request for $0 from the Inland Waterways Trust Fund (IWTF) for construction of inland waterways lock projects. The FY20 Administration budget requested $111 million for the Lower Mon project near Pittsburgh, of which $55.5 million came from the IWTF that is funded through a diesel fuel tax on commercial operators, with the other half provided by General Revenues. Later, Congress would appropriate more than three times that amount—$336.76 million—to fund four IWTF-funded projects in the FY20 Energy & Water Development (E&WD) appropriations bill. This enabled efficient funding for four projects currently under construction: Kentucky Lock (Ohio River), Chickamauga Lock (Tennessee River), and funding to completion for the Lower Mon Project (Monongahela River) and Olmsted Locks and Dam (Ohio River). So back to the FY21 request of $0 for construction means that the two remaining priority projects would have to stop construction, workers sent home, the timeline to complete the projects would increase.

Also disappointing, the FY21 budget also proposed to an additional user fee to supplement existing revenue from the $0.29-per-gallon diesel fuel tax paid by commercial operators, plus 10% of the cost of Operations and Maintenance (O&M), which has always been a fully Federal responsibility. The Administration noted this new fee would raise $1.8 billion over a decade.

A welcome Corps FY20 work plan
Yet, also on February 10, the Corps of Engineers released its FY20 work plan that allocated funds provided in the FY20 E&WD Appropriations bill for the Civil Works mission, and that news was extremely positive.

In other good news, $85.35 million was slated to initiate the deepening of the Mississippi River Ship Channel to 50 feet to facilitate Post-Panamax ships in the Gulf, which has just begun over the last month.

The Corps’ Investigations account allocated $6.05 million toward continuing PED for the Three Rivers Project in Arkansas, and $7.7 million to continue PED for the Upper Ohio River Navigation Study in Pennsylvania.

Another bright spot was the allocation of $4.5 million for the Navigation and Ecosystem Sustainability Program (NESP) on the Upper Mississippi River and Illinois Waterway System to continue PED ($3 million was provided for navigation and $1.5 million for the environmental restoration component of NESP). This is the first allocation of PED funds for NESP since 2012. NESP is a unique program with a dual function to ensure efficient navigation infrastructure and to protect the eco-habitat of the Upper Mississippi River System (UMRS).

House-passed robust FY21 appropriations
On the appropriations front, on July 31, the House of Representatives approved by a vote of 217-197 an FY21 minibus package that included funding for Energy and Water Development (E&WD) that funds the Corps, quintupling its Construction and tripling the overall Civil Works budget ($7.63) billion compared to the President’s budget request.

The Corps’ Investigations account funding was $151 million, equal to the FY20 enacted level and $48 million above the FY21 request.

The IWTF level was $90 million for a total of at least $180 million in funding for construction and major rehabilitation of inland waterways projects, with the final program level dependent on project-specific allocations to be made by the Corps.

Funding for Operations and Maintenance (O&M) was $3.84 billion, an increase of $48 million above FY20 and $1.8 billion above the Administration request.

Overall proposed FY21 funding for the Corps is $7.72 billion, $72 million above the FY20 enacted level and $1.76 billion above the budget request. The House-passed funding level was $7.63 billion.

Like the House bill, the Senate bill also provides for seven new study starts and seven new construction project starts, of which two are for navigation.

The Corps’ Investigations account funding is $151 million, an increase of $48.51 million above the President’s budget request.

Funding for the Construction account is $ $2.66 billion, an increase of $487.81 million above the President’s budget request.

The IWTF funding level is $110 million, $20 million higher than the House bill. The cost-share for Chickamauga Lock was adjusted to 85% General Revenue Funding and 15% from the Inland Waterways Trust Fund (IWTF).

Funding for Operations and Maintenance (O&M) is $ 3.78 billion (the House-passed funding level was $3.84 billion), or an increase of $1.78 billion above the President’s budget request.

$395 million was allocated for Mississippi River and Tributaries, an increase of $185 million above the president’s budget request.

On the FY21 Administration request to spend $0 from the IWTF and to levy an additional user fee on commercial operators, the E&WD bill states, “The Committee is disappointed and perplexed by the budget request’s proposal to not spend any of the estimated deposits for fiscal year 2021 into the IWTF… the Committee recommends appropriations that make full use of all estimated revenues from the IWTF for ongoing construction projects.”

The word is WRDA 2020
At press time still being negotiated with hopes it can pass in the lame duck session, includes WCI’s top WRDA priority to adjust the cost-share for construction and major rehabilitation of inland waterways projects. The bill modifies the inland waterways project cost-share to 65% from the general fund of the Treasury/35% from Inland Waterways Trust Fund (from 50%/50%).

The House T&I Committee’s WRDA bill includes the 65%/35% cost-share adjustment but with a seven-year sunset provision. Last May, the Senate Environment and Public Works Committee marked up and passed its WRDA bill, which included a permanent cost-share adjustment for construction and major rehabilitation projects at /65% General Revenue/35% IWTF with no sunset provision. Keeping WRDA on a biennial schedule is important.

WCI will report on the status of WRDA in its next column, and until then, we wish readers the happiest of holidays ahead and an even better 2021. 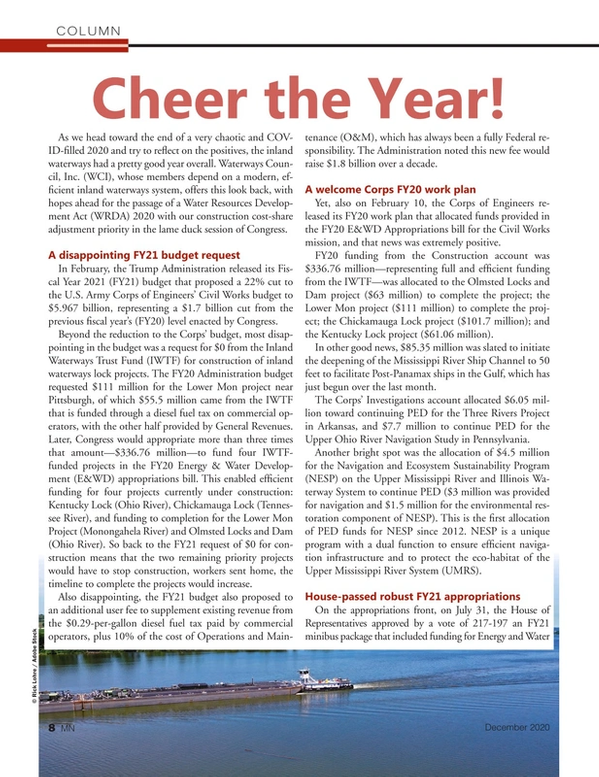