It is one thing to have a policy posted. It is another to review and explain such a policy to a new crew during their orientation or when they first sign on a vessel. And, finally, it is still another to claim the policy has been effectively implemented.

Defining Stop Work Authority
A number of recent maritime incidents have led to ‘Stop Work Authority’ (SWA) becoming a federally mandated part of a safety management system (SMS) for vessels operating in certain areas and industries. Other sectors, while not federally mandated with respect to this requirement, adopted and implemented SWA years ago, on their own. SWA, far from a new concept, is one that recognizes the importance attached to encouraging any employee on board a vessel (whether licensed, unlicensed, veteran, or greenhorn) to speak up and express concern should they fail to understand any operation being undertaken, feel any operation or sailing condition unsafe, or believe any operation is being undertaken incorrectly.
“Operation” is not defined specifically. Rather, an “operation” encompasses any part of a company’s or vessel’s commercial or sailing activities. SWA, in effect, places authority and responsibly directly on each and every member of a vessel’s crew.
Bridge Resource Management (BRM) is a work concept which originated in the airline industry during the early 1970’s, embodying the idea of the vessel being navigated as a team. Although one individual has the ‘Conn’ on the vessel, the team supports this person through managing the workload and providing the conning officer with pertinent information, but also through the ability – the responsibility, actually – to raise questions concerning the actions (or inactions) of the conning officer.

Implementing SWA
Implementation rarely occurs within a vacuum. For either BRM or SWA to work, encouragement of the “team approach”—one involving no fear of reproach or repercussion—must be effectively communicated to all involved. Merely posting the policy on a bulkhead does not constitute its effective implementation. Rather, the concept must be actively encouraged through active practice, if not drills.
A good starting point might be recalling an accident or incident where someone could have spoken up and stopped an operation when it was clear to him or her that things were unfolding adversely. Think of what it would have looked like if someone had stopped the operation. At what points could they have stopped it and how much damage would have been mitigated?
For example, sea stories are one way to start the ball rolling. As a third mate, I participated in a rescue of a life raft full of crew members forced to abandon their overladen log ship in a storm.  Long before the days of SARTS (Search and Rescue Transponders), we arrived at the scene at dusk. Like looking for a needle in a haystack, finding the life raft at the scene was very difficult; however, once dark enough, we saw a strobe light. The strobe was coming from the EPIRB (Emergency Position Indication Radio Beacon) tethered to the life raft, but floating outside it.  Following the rescue, the ship’s captain informed us that the chief cook (probably the lowest person on the totem pole) had absolutely insisted that the EPIRB be placed outside of the life raft. It was this chief cook’s insistence and the captain’s willingness to follow his advice that had saved the crew.
What empowered the Filipino cook to challenge the Japanese captain? I understand there are no atheists in foxholes, and I don’t think there are any in deployed life rafts or lifeboats as well.
Practice your “All Stop.” Consider adding it to the list of (rotating) topics for fire and boat drills.  Incorporate it by having it set up in advance. See who will stop the operation; or have the person contemplating the unsafe act stop him or herself and explain why as part of the drill. Then review this in ‘the debrief’ after the drill is completed, even acknowledging it was all a “set up” to determine who would or would not stop the unsafe action.
A successfully implemented “All Stop” can also be demonstrated during a tool box meeting or a Job Safety/Job Hazard Analysis. Imminent danger is not a requirement for “All Stop” to be practiced.  Similarly, “Near Miss” or “Near Loss” reports should be part of any effective management system. Sharing these with your fleet of vessels is an excellent means of introducing the topic and to start crew members talking.  It also makes your fleet a fleet, not just a series of vessels floating independently, like little islands.
Consider doing the same with “All Stop.” Have vessels’ crews report when “All Stop” has been used and why. Prime the pump and send out a few to get the conversation and thought patterns going. Utilizing “All Stop” as another tool in your safety management system can reduce your company’s exposure to accidents, incidents, and injuries as well as empower your crew members with the authority and the responsibly for their safety as well as the safety of others. Posting company policies aboard a vessel are indications that a company does, in fact, have such a policy.  But implementing these policies, again, does not happen in a vacuum.

(As published in the December 2014 edition of Marine News - http://magazines.marinelink.com/Magazines/MaritimeNews) 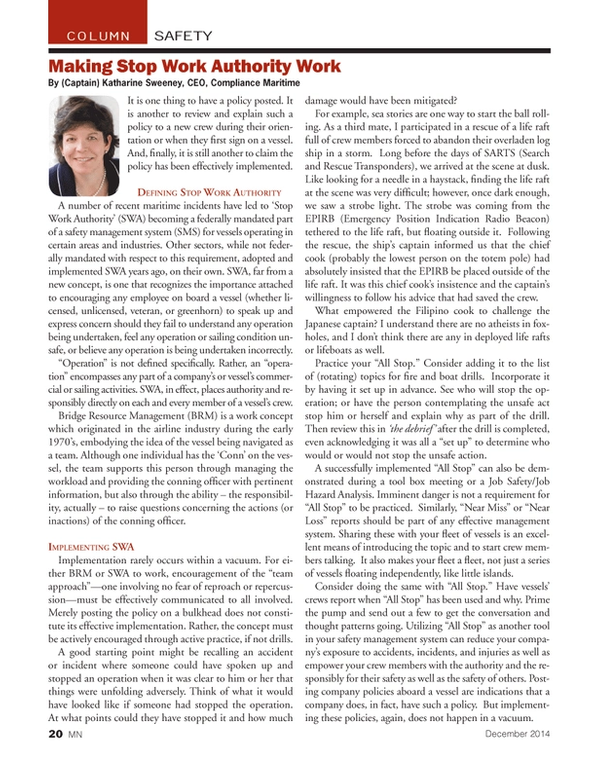 Other stories from December 2014 issue