A Closer Look at Dynamic Navigation for High Speed Craft

FRC International launched the innovative ‘DYNAV’ dynamic navigation system for high speed craft at Chalmers University of Technology in Gothenburg, Sweden in October. The DYNAV launch event enabled attendees from Scandinavia and Europe to come together with the objective of improving seafarer safety, operational performance and interoperability on fast craft. Professional sectors organizations included Search & Rescue, Navy, Special Forces, Coast Guard, law enforcement, maritime pilots, maritime legislators, training organisation and boat builders.
Dynamic navigation is required for the professional fast craft sector because it is different from other marine navigation requirements. Because of this, the DYNAV system has been developed to manage the high operational pace and dynamic nature of transiting fast craft close to shore. Electronic navigation systems are generally not designed to deal with high octane navigation. Fast powerboats need intuitive information systems that identify where they are now, where they will be and the location of risks. Closer to aviation than sailing boats, navigating in the fast craft sector is another skill altogether.
DYNAV MANAGER was presented by Captain Fredrik Forsman of Chalmers University / Swedish Sea Rescue Society and Dr. Trevor Dobbins, Technical Director of FRC International. The one day course gave decision makers a concise overview of this next generation, resilient navigation system. Attendees were introduced to the development of dynamic navigation and the robust methodology that underpins the system. These standardized navigation procedures are designed to enhance safety, operational effectiveness and support interoperability between maritime units.

Teamwork Taught
Operating fast craft close to coastlines places a high workload on the driver and navigator. They have to work as a team to avoid shallow areas, natural features, energy platforms and other vessel traffic. These tasks are made more difficult by poor weather and adverse sea conditions.
Captain Forsman explained the evolution of the high speed navigation system, “Until the early nineties the Swedish Amphibious Corps military craft had a top speed of 20 knots, then the Combat Boat 90 (CB90) was introduced with a 40 knot capability. The CB90 was manned by three conscripts and carried up to twenty troops. The Swedish archipelago is a complex environment with numerous un-marked islands. Old school navigation was neither safe nor efficient and an alternative methodology was required. The Amphibious Corps high speed navigation system was then adopted by the Swedish Sea Rescue Society (SSRS) and adapted to their circumstances. After a number of serious accidents with commercial high speed craft, the Swedish Maritime Authority introduced legislation that called for mandatory high speed navigation training.”
The dynamic navigation methodology has been developed into a robust system that is straightforward to implement within military and professional maritime organisations. The main components of the DYNAV system are simply designed to reduce risk for fast response craft undertaking dynamic, high-speed operations. First, this involves the methodology to conduct changes in direction and course. Secondly, it outlines the information required by the navigator to plan and direct the course changes. Third, the communication of information to the helmsman to perform course changes effectively and safely. These three components are then developed into a system that is embedded within a training structure that professional training organisations can deliver.

DYNAV & Simulation
The introduction to DYNAV at Chalmers University Maritime Department included a demonstration utilizing three separate full bridge simulators. These simulators are monitored from a control centre. Each bridge can accommodate helmsman, navigator, commander, communications plus supporting crew in a fully equipped bridge. These sophisticated simulators deliver a 180 degree external view with the ability to alter sea conditions, visibility and day / night for each scenario.
DYNAV MANAGER attendees were divided into groups and then assigned a bridge simulator. Lessons learned included the fundamental differences between pre-planned conventional ‘ship’ navigation and the rapidly changing situations in ‘high speed craft’ operations. Conventional navigation scenarios included planned port entry that commences with pilot vessel rendezvous at a known time and defined position. In this situation, the navigation is essentially a countdown of timing and course changes to an expected outcome. The difference with search and rescue is the dynamic nature of the situation that requires appropriate response, often at high speed due to the critical and changing nature of the mission. Each group ran a SAR mission with a rapidly evolving rescue scenario set in the challenging environment of the Swedish archipelago.

Human Factors
As maritime operations become more challenging, professional crews need to perform their tasks with spare cognitive capacity to avoid incidents and their consequences. Riding on the knife edge of success or failure is unacceptable at sea. With increasing boat speed ‘navigation’ is an ever increasing challenge that has to be met in order to maintain an acceptable level of safety for crew and vessel. Firstly, at high speed the navigator has less time to assess the situation and make safe and effective decisions than at lower speeds. Secondly, the navigator suffers reduced display effectiveness due to sea state induced motion that may include repeated shock and vibration. And, if the situation is complex, then the navigator will also suffer a shortage of time to complete the required tasks. At this point, the choice is either slow down or accept a reduced level of safety.
Dr. Dobbins demonstrated how human factors impact on all operations at sea. He showed examples of accidents and explained, “Navigators cannot be trained to cope with every single possible situation that they can expect to encounter. If a situation, environment or location is new then the navigator is unlikely to have had the opportunity to gain the experience needed to make good decisions based on local knowledge. Even an experienced operator will encounter new situations and in that perspective they are a novice. The DYNAV methodology / System supports good decision making in new or unique situations for all levels of operators.”
The helmsman’s task of driving the boat alters with higher speed. There is a greater responsibility for own craft and other craft that is controlled by the International Regulations for Preventing Collisions at Sea (IRPCS). Slow going vessels may not be expected to keep a lookout to the horizon trying to identify high-speed vessels that they should give way to. Therefore, high speed craft have a greater responsibility when encountering situations with significantly slower craft.

Standardized Methodology = Interoperability
The use of a standardized methodology also facilitates interoperability between agencies and nations. The DYNAV process is primarily designed to support Green Water (littoral / coastal) and Brown Water (riverine / estuary) water environments but can also be used for Blue Water (open sea) operations. DYNAV is designed to work with all vessels in all situations. Due to the nature of current international operations the focus is on Rigid Hull Inflatable Boats (RHIB), planning craft, novel hull forms and hovercraft. The DYNAV standard is designed to be a robust process that may be adjusted for use with specific sectors including military, security, Search and Rescue (SAR).
Equipped with standardized DYNAV information, the fast boat driver is able to conduct the next turn or action with confidence. Captain Forsman explained, “In DYNAV, information is communicated with a standard protocol. The navigator gives the driver a general briefing about the situation then there is a set of standard instructions that gives answers to fundamental questions; Where are they going now? Where and how to execute the next turn? Where are they are going next? Where should they not be? How do they know they are safe?”
The traditional school of navigation recommends knowing the vessel’s position at all times. This is simply not possible for high speed craft and the problem is accentuated as speed increases. Conventional navigation has a requirement for Location Certainty. DYNAV recognizes that in high speed operations it can be as important to know where ‘the craft is not’ as knowing where ‘the craft is’.
The cross checking of information sources within the Situation Awareness (SA) process reduces the risk of errors and enhances the navigators Location Certainty to facilitate the ‘Plan’ phase of the DYNAV method. Gaining and maintaining SA includes the procedure of checking and cross-checking sources of location and environmental information to inform the navigator and enhance the certainty of the crafts current status within its surroundings. These sources of information may include visual, paper chart, radar, electronic chart, heading, course over ground, depth and GPS.

DYNAV Curriculum
The FRC International DYNAV System covers all aspects starting with DYNAV PRE learning that can be delivered as eLearning or in the maritime classroom. DYNAV C2 is on-water training that focuses on Command & Control teamwork skills where the navigator uses the standard command protocol to communicate with the helmsman. DYNAV SIM allows operators to push themselves beyond their current limits using simulation, similar to flight training. DYNAV ADV increases the tempo and introduces specialist applications such as LCAC and riverine operations. DYNAV MIL deals with poorly charted coastlines, more complex environments and the need to interact with C4i systems plus operate with other craft, aircraft and land based assets.
The standardized DYNAV System can enhance operational effectiveness and support interoperability. In 2007, U.S. Coast Guard Vice Admiral Parker said, “New international training standards are required that address not just the competence of fast boat handling in the vicinity of other platforms, but the capability to be interoperable with other organisations and agencies during maritime operations.”
FRC International Training Director, Jon Hill describes best, perhaps, how DYNAV can be incorporated into a standardized training system for fast boat operations. “Standardization For Interoperability (SFI) is a recognized requirement across many professional sectors. The FRC (Fast Response Craft) training and qualifications system supports effective interoperability between both national and international organizations.”


(As published in the December 2013 edition of Marine News - www.marinelink.com) 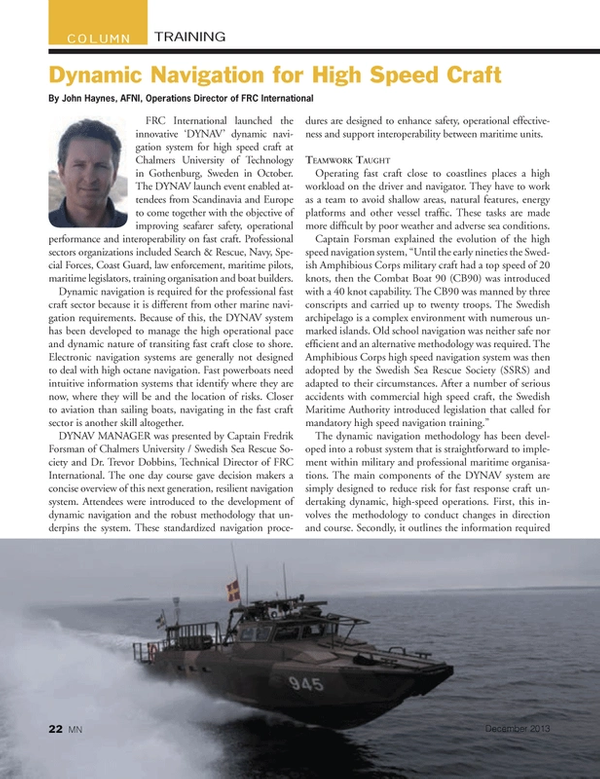